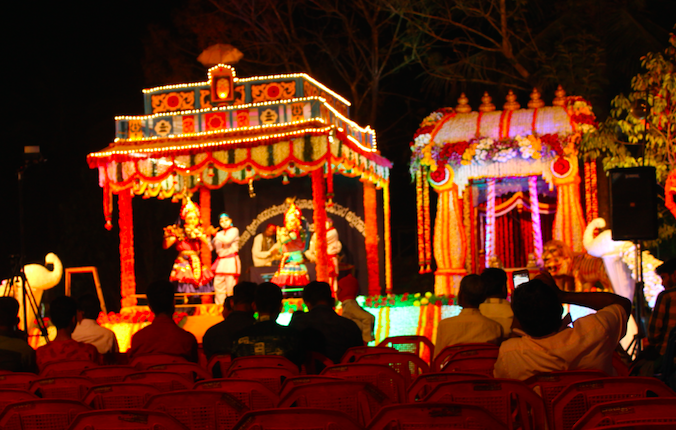 The parade in Goa inches over the bridge crowded with fathers, mothers, uncles, aunts, brothers, sisters, three deep pushing against the green tarp fence.  The floats are far away.  Traffic is stalled and we inch forward past the pink Mardi Gras mask as big as a billboard glued to a roundabout.   I’m in stale air-conditioned comfort in a hired taxi sent for me, leaning back as the driver negotiates  space between cars and motos carrying families to festivities. Sidewalks are crowded with youth, girls in kurtas and summer dresses, boys in runners and sandals, European odd couples in baggy Indian pants, pale-skinned dread-locked Rastafarians.

I don’t want to be here.  Warned in the security briefing against crowds, and learning at dawn of the young Indian engineer who’d been shot in a bar by a Kansas racist, I’d decided to stay inside the gated garden at Novotel as dusk fell, drink a Kingfisher, sit in a rattan chair by the quiet blue chlorinated infinity pool emptied of splashing children and their watchful parents.  But I’ve been shamed into coming, embarrassed at wanting to hide.

It’s Goa!!! she’d texted, as if tourism is some kind of protection.  And I see her, Dancer dressed in red skintight pants and high heeled tap shoes,  a turquoise and diamond studded peacock mask feathered above flinty brows. I tell the driver to stop, and I get out in the middle of the foetid street to follow her into the Black Sheep where she’s saved a seat at the bar.  I order a Jack Daniels, the man I’m married to this season, remembering, as the bartender shakes double-fisted martinis, the husband I left at home.

Hours later, midnight at Bob’s, she and the Russian girl challenge one to one vodka shots.  In the cigarette smoke, a tatted bald Australian talks a line while the grey hair down the table snorts one.  Time to go, I say, paying for my own drink and walking blind along the side of the road towards  the closest hotel.  At the explosion, I jump, scared to Death by the fireworks of this infernal night.

As Carnival welcomes Lent in preparation for Easter, this digital composition explores mortality in the context of the eternal divine.

In hobli, text about hostel living and working in a village is juxtaposed with devotional music honoring Ganesha and illustrated with stunning photographs of sacred Yakshagana theatre taken by a young Indian documentary filmmaker.