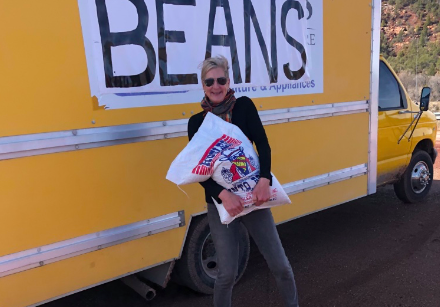 Last week, on the bright spring morning of Sizdah Bedar--thirteen days after Persian New Year, Ebrahim stood at the turquoise-tiled kitchen counter in a West African lagos bib apron, cutting white chunks of beef fat from a hunk we got at the Village Market on our way home from Las Cruces.  He kneaded it with lean grass-fed ground beef, a minced purple onion and a whisked organic egg from the neighborhood seller around the corner.  Into the mix: salt, pepper and nutmeg. He shaped them into long sikhkarde on four metal skewers he would grill for lunch on the little bbq on the deck. Like Persians in Iran, we left our house with our sabzeh–a plate-sized spout pie grown from soaked lentils for Nowruz. In the first twelve days of the new year, tradition says, the sprouts have collected the coming year’s potential ills, so on that thirteenth day we rode our bikes–the sabzeh in a plastic bag dangling from Ebrahim’s handle-bars–along the deserted sidewalk along East Alameda to a creek within the Governor’s four-mile limit from home.  We parked our bikes and sanitized the bench of a picnic table, and, side-by-side tied single knots in many long skinny tender sprouts–a wish for each of our friends, for family members, for first responders.  I wrapped the red prayer string from the Tibetan Buddhist monks around the herbs and put them in the water–but the spouts got stuck in the slow-flowing trickle and I’ve lost hope.

Two weeks ago Friday, we’d returned from the Organ Mountains where we were sheltering in place in the Aguirre Springs campground, arriving there before the Governor’s stay at home edict on March 23 and before Forest Service land closed.  With everything we needed to survive packed in the Mitsubishi, we spent five days isolated in nature before the Pastor at St. Bede’s texted that Ebrahim was essential.  With the official letter in his Inbox in case we were pulled over by State Patrol, we drove back home up deserted I-25.

I like to think of myself as a grown up Girl Scout–respecting God, country and obeying the official laws–but the governor’s edict and panicked shoppers at Trader Joe’s before limits of two per customer and six-feet distance marked with yellow duct tape on the cashier’s aisles threw me back into my self-absorbed adolescence with a vacillating moral code.

On the way back to Santa Fe, I asked Boo to stop in a little grocery store in Hatch, the town of the chilies.  I bought nogales and habanero chile and a smoked salsa from Gilly’s Chili Company in a screw top jar. All the bagged white rice was gone like it is in Santa Fe’s stores except for four 32-ounce packages of MAHATAMA Thai Long Grained Fragrant Jasmine Rice. I took all of them which I rationalized because they were obvious left-overs, rejected by the Hatchan shoppers. I asked the cashier if there was a lot of panic and anxiety down here, and she shrugged as she hit the keys on the cash register without plastic-gloved fingers and said Not much. Yet.

At a roadside store that had flags flying and a big marquee HATCH!! and an OPEN sign, I made Boo pull over so I could support a small business that hadn’t yet failed by buying five pounds of frozen roasted Hatch chilies and local New Mexican honey.  I used the toilet there because it was probably less a hotbed of germs than the grocery market and then washed my hands with soap twice, opened the stall door with the sleeve of my sweater and in the car again with the plastic travel-sized container of hand sanitizer that has to last us both through the quarantine because there isn’t any more.

The asphalt parking lot at Fantastic Senor’s on the outskirts of town was stacked with Mexican floral hand painted pots and had an OPEN sign, too, in defiance or desperation.  There wasn’t a lot of police presence in the street then so Boo parked the car and I got out, started poking around in made in Mexico: hand-blown confetti water glasses and hats and woven ponchos and rugs and under the loaded dusty wooden shelves I found a box of hand painted tiles.  I squatted down on the cement and started counting them out and bartering.  No puede! the dark-haired Senora said.  Si, usted puede and she was laughing No! and I was laughing Si! as if there wasn’t a Dios de los Muertos pandemic.  She got her price and I bought enough colorful Mexican squares to replace the ones that had shattered on the table Boo had built and tiled last year with rejects from the bathroom counters. He bought a dark brown straw hat and a leather wallet with fake snakeskin and gold rivets that pokes out of his back jeans pocket like an invitation.  Boo said I didn’t need to hoard but I made him squeeze seven Mexican pots in with the tent, pads, sleeping bags, cooking gear and recycling. Then we got back on the road and headed north.

There were no roadblocks then at the county line. In the shopping mall off Cerrillos, Total Wine was open–it was essential then, but for reasons of extreme social distancing, unlike Home Depot and Target, it’s been shuttered. In these uncertain times, I’ve become borderline alcoholic and I needed to stock up because we’d drunk the last of the gin, a bottle of tequila and three bottles of wine at the campsite. Boo said we could get booze at Albertson’s but I’m afraid to shop there. This mega-store’s wide aisles were empty of shoppers and stacked full of bottles. I got greedy:  I bought two Vouvrays, three Malbecs, four Pinots, a couple Chardonnays, a South African Chenin Blanc and a bottle of bourbon, one of tequila and one shapely chocolate Godiva and paid for it out of my cashed-in IRA which has lost more than half its value. I re-sanitized the cart, the boxes, the car door, the seat belt buckle, the stick shift and my and Boo’s hands.

When we got home, an orange insulated zipped and sanitized two-handled shopping bag was squeezed behind the screen at the front door to 512 Camino de Guadalupita, A New Mexico Harvest bag had been delivered. A month ago at the beginning of the uncertainty, I joined the southern New Mexico food cooperative around food security—mine.  I don’t deserve emails of gratitude in my inbox because we are supporting local farmers who are picking. Each Monday, I make my expensive picks online and on Friday a delivery worker in a white van drops off the haul: fresh oyster mushrooms grown in the shade of the Bosque; giant white daikon radishes; tennis ball black radishes, purple new potatoes; organic fingerling white ones; dark green red veined broccoli leaves; dense organic spinach; fresh white garlic bulbs with long fragrant poky tops. It’s incomprehensible bounty in this unprecedented time of predicted shortages,

Not to mention a bag of Rustler pinto beans on the floor of my kitchen pantry. Boo said we didn’t need fifty pounds but I insisted. Every time I open the door, the logo printed on the burlap sack of a bandana-masked man and two pointing revolvers like a stick-em-up–or a guy with the virus–stares me down: Stay Home! I bought it from a New Mexican guy in his yellow truck off the road at Pecos and Glorietta. Eighty dollars cash for the “last beans in the Southwest.” I think, in retrospect, maybe he was the bandit.

Boo works at Church several hours a day building an on-your-honor food donation box for the parish. Lately, feeling hoarder’s remorse, I said take some beans! And I’ve capitulated. Looking at demographics in Santa Fe, I seem to be another well-stocked retired white person sequestered in my casa, afraid of contamination, vulnerable. Like many, my professional calendar has been wiped blank, some refunds coming in from two-months cancelled travel for work in Central Asia and to visit family in Iran. It’s not a real hardship, not compared to the economic struggle there. But I’m trying to stay sane staying home. The farthest I’m allowed to go is a three mile walk from my house to Frenchy’s Barn Park and back, mask looped over my ears. I’ve learned how to Zoom, email friends self-quarantined in France, Austria, Tajikistan, South Africa. I’m developing an online digital story course. I’m practicing lectio divina with Rumi’s devotional poems and making short digital Corona Stories. My journal’s morning pages are dense with ink blue scrawls pleading the virus will subside and we’ll all be allowed to go back outside.