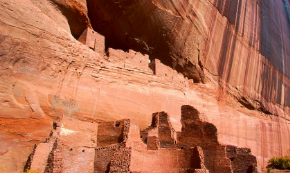 My surgery is scheduled in a week.  I look towards my operation with hope though I won’t know until after if the surgery will have been successful.  Not until Dr. Hogan slices open the same incision he stitched shut with the explant will he find if the six weeks of vancomycin has killed the infection.

I hope for a different future from my recent past:  I hope to rove around the world under my own volition.

In Canyon de Chelly in Arizona this summer, we camped in the Monument in a charmed circle of massive cottonwoods, twelve druidic totems I embraced around midnight when I crawled out of the tent for a tinkle.  Each trunk a monument to longevity, dwarfing my own human decades.  They felt like rock, no sense of sap when I pressed my cheek against the petrified riffled bark.

In the morning, the cacophony of birds woke us.  Boo climbed out to heat water in the JetBoy and made plunger coffee in the camping press.  Nothing like fresh brewed French Roast under the comforter and quilt inside one’s own screened in temporary home.

We packed up and then hiked down the White House trail. Flawless turquoise skies above the undulating rocks and the massive curve of the red stonewalls, oranges, striations of white, yellow and pink, smell of dust and odor of dry.  A few skinny lizards; tupelo chirping from branches; pink trumpets of cactus in bloom.

Tucked into the crevice of ledges the unmistakable ruins of the Anasazi. Six hundred feet below the rim on the canyon floor,  a green gemland of grass and blooming trees, the lovely ruins crumbling back into the land.

Climbing out, the rise of sheer walls from the canyon floor, magnificence in their vertical striations, dripping with black like a bottleful of ink poured down the face.

My body wanted to hike, the muscle memory engaged from half a century of trails but my hip demanded my patience.  Each plant of my extension pole invited the shoulder,  quads, the glutes to take the burden, cajoling the flexor, asking for another step.  I counted 100 and then another ten decades as in prayer. I wanted to give in: my groin asked for respite each step. But climbed the entire way back out in pain, though not in grief.  That came after.  The inconsolable ache of my loss.

The text of a Rumi poem is illustrated with an xray of my displaced femur, travel photos from Mongolia and New Mexico, and internet-sourced images to invite patience on this long journey of healing.