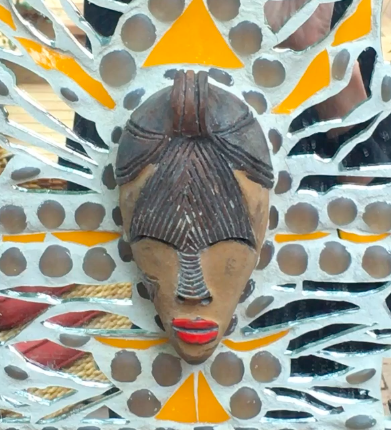 I hobble into Dr. Joe’s office on Robocop crutches and sit on his sofa on a fuzzy white faux sheepskin pillow, stretch my ankle-booted left leg out in front of me and settle back. He sits across from me in a lazy boy chair, a white legal pad and pen on the arm. He’s wearing a navy blue printed button down shirt and a red tie and navy khakis.  He has a shock of white hair but seems younger with blue eyes that seem to peer through metalic designer frames with a sense of humor into my confessions.

My weekly sessions with a psychiatrist are to find ways to bring as many resources as I can muster to fight this bacterial infection in my bone.  Supporting the post-surgical care, twice daily IV two-hour doses of pharmaceuticals and weekly labs, I want positive thinking, visualization, and prayer: whatever it takes.

Dr. Joe asks me if I meditate.  I tell him about Gaia and the Insight Timer App I plug into at night trying to sleep.   We explore ways to meet my insomnia and the anxiety that washes over me when I wake in the night from dream sleep.  CBD oil, Melatonin, L-ethylene maybe. He asks if I’ve worked with contemplative meditation and introduces me in his soft spoken but direct way to Lectio Divina or “Divine Reading.”  Lectio Divina is a traditional Christian monastic practice of scriptual reading, mediation and prayer intended to promote communion with God and to increase the knowledge of God’s Word.

I imagine medieval monks with tonsure in rough, rope-belted robes and leather sandals bending over illuminated manuscripts in their monasteries. In this twenty-first century, I turn not to the Bible but to a beautiful hardbound text of Rumi’s poems: The Illuminated Rumi, a text Ann Raabe gave me years ago with the inscription, “May we celebrate together, forever, the divine & magical.”  Coleman Bark’s divinely witty translations are illustrated by Michael Green’s unapologetic cultural appropriations:  the dome of a Persian temple, ancient Japanese scrolls, Native American figures, Greek sculpture, Tibetan mandalas, Medieval art, Buddhist iconography.

Rumi, born in Afghanistan in the thirteenth century, wrote Eastern-Islamic poetry, calling his spiritual teachings “the roots of the roots of the roots of the (Islamic) religion.”  Though some consider Rumi’s Persian-language holy scripture, Willian Kilpatrick in Christianity, Islam, and Atheism: The Struggle for the Soul of the West notes that others believe Rumi’s followers’ rituals of music and dance are “un-Islamic.” In a similar vein, Bark’s “new age” texts have been criticized as divorcing Rumi’s mysticism from its historical background.

Divorcing myself from historical tradition, I bring the four steps of Lectio Divina–reading, meditation, prayer and contemplation—to the new age paragraphs of a non-Islamic poet in a secular exploration towards insight and meaning.   I begin with four contemporary questions from a contemplative website: 1) what does the text say?    2) What does the text say to me?   3) What do I want to say to the Divine about the text?  4) What difference will this text make in my life?

I transcribe the poem in my journal and sit quietly and allow my mind to wander.  From the internet, I unabashedly download images—from Pixabay and Pexel with Creative Commons Licenses CC0 and one pirated .gif.   I explore the multiple layering of images on five simultaneous video tracks in my movie-making software.  With each technical adjustment, an intuitive understanding of the poem begins to emerge.  As I fuss with the timing and the overlays, more meanings materialize and a complex psychological interpretation reveals itself.    The original digital collage I’ve created from sourced images, paraphrased text, and found music delights me.