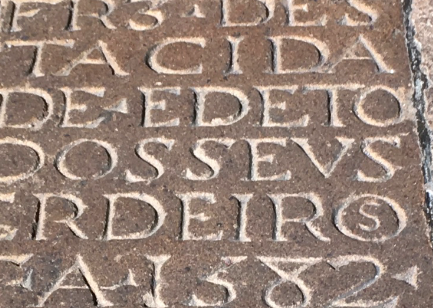 On the first anniversary of my father’s death, I dream I telephone him.

“Hello,” my Dad says on the other end of the line, the “o” melodic, soft and sultry, an invitation. It’s his lady voice. After Mom died, he started looking, hosting the girls from the garden club, inviting a forty-year old from the investment seminar, flirting with singles on the golf course.  Then, at eighty-nine, he joined Match.com.

I ask him if anyone is winking at him.

He says he gets lots of winks, joking.  Then his tone shifts.  “Where are you? I’ve been calling. I want to go see the stone.”

So I go over there to where he lives. I pull the Mitsubishi into his cul de sac, Greg’s truck is not parked in front of the dusty green clapboard house he bought when Mom couldn’t manage the stairs anymore in the big house. I don’t like to go in when the new roommate is there, the guy who rents my Mom’s room.

I get out of the car.  Dad is not in the garage at his workbench.  I check around the side where he’s layering leaves, manure, and dirt in two six-foot bins.  It smells like shit.

I walk around to the shed he built behind the garage to store his lawnmower, electric edger, aerator, cultivator and fertilizer.  He’s on his knees in the dirt, transplanting strawberries in the garden he plowed out of the backyard lawn.  He looks up at me, says, “Hell, they’re not doin’ too good.  I put five years of my life into this soil. It’s just getting to where it is producing but, well . . .” He sits back on his heels and shrugs.  “I thought I would die here. You never know what life has in store.”

Greg has made an offer, and Dad’s selling the house.

He goes on all fours and puts a knee forward.  I offer my hand.  “I can do it,” he says, and pushes up with his left, holding on to the fence slat with his right. He pulls himself to vertical, leans on to the wooden handle of the shovel he’s used for forty years, and shakes his head.  “Getting too damn old,” he says.  He’s chin is grizzled and he’s jowly, his nose a sharp angle.  His eyes are brown, bright.  His khakis are muddy. I suggest he change them.

“We’re going to a graveyard,” he says, like I’ve inherited dementia. I don’t argue.

He walks ahead of me, looking down at his socks, feet slipping in the rubber garden sandals. At the car he opens the door, puts his backside in first, holding on to the roof for support, and jack knifes his legs inside.

I get into the driver’s seat, ask if he wants to stop, get flowers.  He raises his eyebrows, says no. He just wants to see the stone

“What the hell are you talking about?” he says.

“You know, you go to the grave, you know, remember Mom,” I stammer.

He says he stopped by a week ago.  I’m surprised. I thought he’d left her behind when he’d started dating again.

On the highway, we don’t talk. I turn into the church parking lot. Dad gets out of the car, putting one foot then the other on the ground, leveraging himself out with the doorframe. He heads down the walkway, not looking back, past the dead baby cremariums, steps off the sidewalk at the life-sized white Jesus hanging on a crucifix, and shambles between headstones to the plot near the marble bench, that slab dedicated to someone’s brother and son under the big tree.

It’s been six months since Mom died, took that long to decide on the flat basic gravestone: dark granite border, light granite face. It’s been engraved, the script simple and elegant like he used to write when I was a kid and he calligraphed my name into my missal.   New dirt surrounds the stone, lawnlip edged sharp.  Dad’s grey socked toes are sooty against the green grass.

The early spring morning light filters through the branches of the cottonwood.  A robin alights on a branch above, warbles, drops wet white guano onto a fat tree root.

His urn will be put into the same plot.  At St. Mary’s, it’s one body per grave, but two-in-one for the urns. Though my Mom had wanted hers to be buried, my Dad had convinced her to be cremated. Once the priest had said it was OK with the Pope, she’d agreed, but by then, her dementia had set it and she’d been accommodating to most everything.

“Hell, now everyone in town will know how old I am.”

I find a green leaf shaped like a heart, reach down and press it over the year.  “See, you can just epoxy it onto the granite,” I say.  “No one will know.”

Between my mother’s and father’s names is etched a pair of interlocked rings with the date of their wedding engraved in the middle.  1954.  A year before I was born.

“She didn’t want to marry me,” my Dad says, lightness in his voice again, “but I hounded her, took her to nice places, and you know, she appreciated it. She never wanted the best, she was just happy to have enough.”  He stubs the edge of the stone.  “We had a lot of fun together.”  Then he gets the look of a junkyard dog finding a bone under a moth-eaten pillow. “Oh, we did so much necking,” he says.

In the distance there’s the hum of a mower; around us the sweet perfume of cut grass.

He shrugs his shoulders.  “Oh well, there it is.”

I take my father’s hand. His palm is rough and already I feel the tremors. He drops mine, turns to go, his head down, shuffling feet in those rubber shoes.

I bend down and trace my mother’s name with my fingertips, say a Hail Mary fast, then follow my Dad back across the rows of other people’s graves.

As this month marks the year anniversary of my father’s passing, pongal’s  images, story and music from Kengeri Hobli in India invite celebration of life’s cycles.