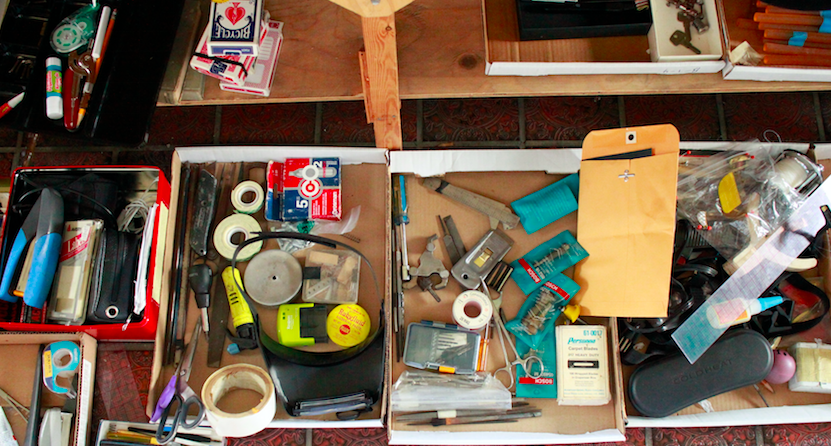 I stayed with my father during his last six weeks, sleeping on the floor in the sad rental in Laguna Woods he’d relocated to at ninety-three, imagining he would do everything the Southern Cal retirement megaplace offered until the end of his life:  date women, golf, play bridge.  In the woodshop, he’d made beautiful mosaic cutting boards and played ping pong in the community center for a couple years, driving around in a golf cart until he fell on the linoleum last summer and decided he no longer wanted to live a compromised lifestyle.

While I was there, he had a full-time caregiver for his personal needs:  my work was witness and conversation, sitting by the hospice-provided hospital bed in his darkened room, listening to the rhythmic uff-shhh uff-shhh of the oxygen machine. When he woke in the morning or in the middle of the night, I’d lean over and say, “Are you back, Dad?”  From the other side, I meant, the unconscious dreamscape he explored for fourteen, then eighteen, then twenty hours a day. “I guess so,” he’d say, coherent, asking for dentures he’d worn for sixty years, stretching his parched lips over the pink ridged trough that no longer fit his shrunken mouth. He’d maneuver them in, hands cupped as if playing a harmonica.  He had things he wanted say before he went away, that he would leave us money he’d saved since he was a child in Czechoslovakia hiding a tin of coins in the attic corner.

On weekends, my niece Livia drove eighty miles up the Pacific Coast highway from Malibu to visit.  She’d come in the front door, and my father would awaken out of the twilight zone of codeine and morphine when she breezed in smelling of jasmine, cannabis and mint, bending down to kiss his grizzled cheek. She called him Grampy: he called her Doll.  She knew where he kept his secret stashes:  old lemon drops in his bedside drawer, stale black licorice hardened to twigs under his socks, gummy cellophane wrapped Nutter Butters in the back of a kitchen cupboard: she brought him fresh, soft Crispy Cremes and he’d say he wanted a taste.  He never did lose that desire for sugar, though he’d lost sixty-five pounds in six months, intentionally limiting his calories week by week in his desire to die. He vacillated, of course, some mornings wanting a waffle or a pancake, though he’d gum only a bite or two of Kroger maple syrup-soaked dough before pushing the plate away and slowly shaking his head, as if the eventual loss of his appetite was a punishment worse than death.

He’d always loved to eat, a kid who never got enough, the food locker padlocked at night in his stepmother’s home. Trusted to go for weekly groceries to the local shop where charges were written down in a book and settled at the end of the month, he accumulated private stock. He bought ten cent cherry pies, put them in a paper bag to hide in a lumber box under the front porch.  She never found out.

Days after his passing, my two sisters and I pulled a couple dozen cardboard boxes from the apartment’s closets to stack on the porch, not much stuff saved from a lifespan of ninety-six years.  I’d helped my Dad relocate five times in the previous decade and he’d off loaded each move.  Of what was left, his grandchildren had their pick. I stuck five yellow sticky notes–a name on each–to the dingy living room wall so they could stash the things they wanted, possessions reflective of their late teens’ andtwenties’ identities—Allie his golf shirts and WWII photos, Maddie an antique pen, Ben his clubs, Jack his tackle box, Liv his worn leather gloves.

After we’d returned to our own lives in separate cities, Liv posted a story on her blog and emailed me a photo of the things she’d picked: I composed a poem back to her. This piece explores how one unedited image and a text juxtaposed in shared digital space may evoke memory and emotion cached in the heart.