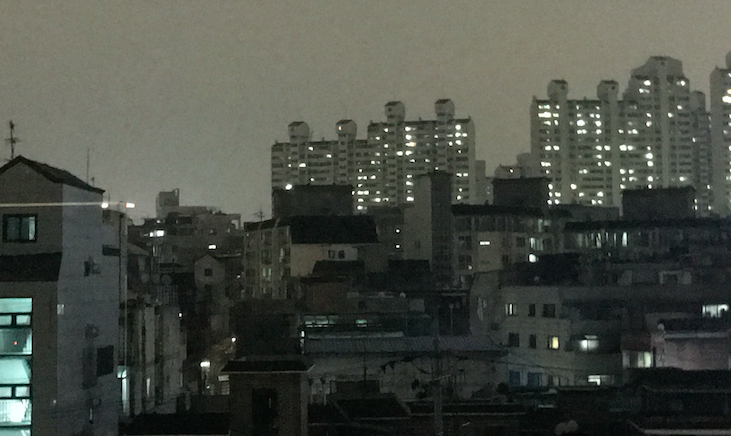 December finds me in Seoul, oddly listening to the pumped in musac Sleigh Bells, I’m Dreaming of, and other nostaligic songs while the city has lit itself up with plastic Christmas trees and promotions in every department store.  Outside the plate glass window of my hotel room, the grey and white legos-block buildings turn sparkle plenty towards dusk. In the night, massive building-sized Samsung screens on top of highrises send an eerie TV glow across the city. Below, a relentless stream of grey, white and black cars gridlock the six-lane highways, taillights red blinking through this ersatz imported holiday.

Ulaanbaatar, like Seoul, mirrored the capitalist fervor of seasonal décor.  Street wrapped tree lights, a giant toy Santa train, and the State Department Store glittering with gold and silver ornaments.  A kind of shopping frenzy in the city, though to be fair, the SDS is the warmest place in the coldest capital on the planet.

I’ve stayed warm in a flat I rented in UB, but this ELSEPC contract turned into a relentless schedule of back to back trainings, heading out by car eight, twelve, or fifteen hour drives to a boxy coal-fueled town in a distant aimag to facilitate 25 or 30 or 40  teachers on learner-centered methodologies and inclusive classroom approaches in a local school.  I disrupted spaces arranged in hierarchical rows, engaged teachers in play, and with more manipulatives than a kindergarten playroom, modeled a transformed classroom.  Post-training mentorship conversations long into the evening, an insomniac night in a bare chilly Soviet-style hotel, and onwards to the next city and another training.

I traveled under a blanket tucked in the back of an old Lada Vesta for hours through Central, Western and Govi-Altai through undulating snowdraped steppes, knife edge of distant hillside etched in brown and grey against a blue sky striated with white,  empty open landscape bisected by a distant single railroad track and a line of thin electric poles.  Nearer the road, hay grass cropped to a few inches and, in the snowsift, stocky Mongolian ponies foraged. There the permafrost goes so deep it never melts.  Most herders have moved south or settled in their winter camps with stocks of cut grass for fodder.

At a lone outpost town, a motorcycle is parked in front of a liquor store, long leather seat retrofitted with a traditional red woven and embroidered camel saddle cover.  A shepherd in the ankle length belted dahl and fur hat saunters out. He sees tall blonde and grins. I put out my hand. He grabs me around the neck and pulls me in close for a bear hug.  I don’t resist, not surprised by the reek of vodka.  My new BFF.

Returning  from a five-hour turnaround trip to Choir, some distance from the capital, we the we turned east and enter a monument built in the last decade to remind this still emerging democracy of it’s three thousand years nearly obliterated by Soviet revisionist history.  Life-size images of soldiers on horseback gallop across a frozen plain while white gers—summer holiday stays– stud the background. The massive Chengiss statue glints in the sun. Mounted on a massive round wedding cake of a museum, the Man of Steel on his steed casts blinding light. I climbed up to stand, toothpick sized to his massive lance, and sweep my gaze across the open lunar-white landcape.  In the distance, mountain ranges roll onwards, deep blue and white and I enjoy a brief frigid hiatus of contemplation.  Then  the back seat all the way to the lung-stinging coal smoggy, traffic congested, air biting city for a “rest day,” filled up with restless movement:  unpacking, sorting, calculating data, repacking for another provincial trip or a local school training.

At  the tail end of November, four days before my final training in Ulaanbaatar with 30 teachers converging from the provinces I’d visited as well as other far-flung regions for three full days of support in professionalizing their field,  I was finalizing the teacher-driven observation protocols, objectives based backward design, proposal abstracts, Linked In profile rotations    I’d worked my Sunday “rest day” as usual.   In the second bedroom of my large post-Soviet flat, I’d been organizing  scope and sequence on giant wall charts;  lining up materials across the floor;  piling up my highlighters, Scrabble cubes and Pictionary cards; labeling texts I’d shipped from my teachers’ library for ETMs,; color-coding label/folder systems, , handouts and task assignments for purposeful grouping the ETMS.   My method was visual, chronological and comprehensible.

In the kitchen on the counter, dozens of yellow sticky notes and receipts, email addresses, to do notes littered the counter and I started to tackle this disorder.   Outside,  dusk was falling, and  the failing light reminded me it the long frigid dark night would keep me incarcerated.   I had time for a short walk around the neighborhood, maybe pick up a Tiger for a late Sunday night brew.

I laced up my gridded ankle high winter Nikes, threw on an old sweater and a down vest, belted  a military coat, pulled on gloves, wrapped a scarf up to my eyes, and unlocked the double doors to my flat. The cement stairs were 3 floors down, empty and dusty, and the broken wooden door squeaked when I pushed it out.  I picked my way across the back lot where there was less ice.  Elegant urban dark-haired Mongolian girls strolled arm in arm back from the State Department Store, wrapped in knee-length down puffer coats, matching scarves and hats, knee-high boots. Men in heavy wool coats and earflap warmer hats smoked and chatted. A stocky woman in thick-soled high-heeled boots pulled along a toddler swaddled up to her pretty brown eyes in snowsuit and scarf.  Many in my neighborhood  returning from weekend grocery shopping carrying bulging plastic bags.

As oncoming headlights swept around corners, I gingerly picked my way across the cracked asphalt to the curb.  In a sliver of a second, I caught black ice, crashed down like Blue Sky Tower in an earthquake, hip cleaved like a plane of diamond.   Lying on my back on the freezing ground, I moaned.  A couple men came over to put their arms under me. “Can I help you up? We can lift you and sit you here.  Cement bench dusted with snow, parked in front of another  indistinguishable ochre apartment in my neighborhood.   I refused to be moved as people walked by staring.

I asked someone to call Sara who I’d travelled with for days and uncountable kilometers across her grand country.  Someone handed me a cell phone and I heard her voice saying she’d be there..  Such consolation to know someone in Mongolia was there for me.  The night turned darker and colder, the frigid ground beneath an infinite ice pack, but I wouldn’t get into the ambulance until Sara arrived.  As I knew she would,  Sara came and the  rest of the story follows a somewhat expected international emergency:  Ambulance to local trauma center, xrays, fracture diagnosis, transfer by ambulance to a local hospital (canteen closed, no doc, no food, no meds, long night).  The next morning,  though as an ELSPEC I was not the Embassy’s responsibility, the PAO and Embassy Doctor visited. with strong advice.to consider major surgery outside of Mongolia.  Recommendation: medevac to Seoul where hip replacement surgery met Western standards..   Scheduled to fly that evening with doctor escort, I learned the  Korean Air flight to Seoul was cancelled.   North Korea had tested it’s ballistic missile in airspace.  It would be another night and day before I could fly.

Two days in that hospital bed waiting gave me time to meet with Program Coordinator Alta and  high-flyer English Teacher Mentors I’d trained.  I handed over design notes, collated materials, assigned leadership roles to guide the upcoming 3-day training with 30 mentors.   Capacity building proven as each of the ETMs stepped up to lead a session on observation protocols, workshop objectives and planning, proposal writing and submitting, international Linked-In profiles.  So that’s the story.  I was medivaced to Seoul.  Ebrahim flew in the next day pre-op and stayed with me for at Sung Ae on a leather cot by my hospital bed were I was relegated to complete bed rest on an I.V. for seven days.   Two weeks post hip replacement  under Korean medical care is another story,  but today,  a titanium hip is in place and I’m hoping to be home for Christmas.