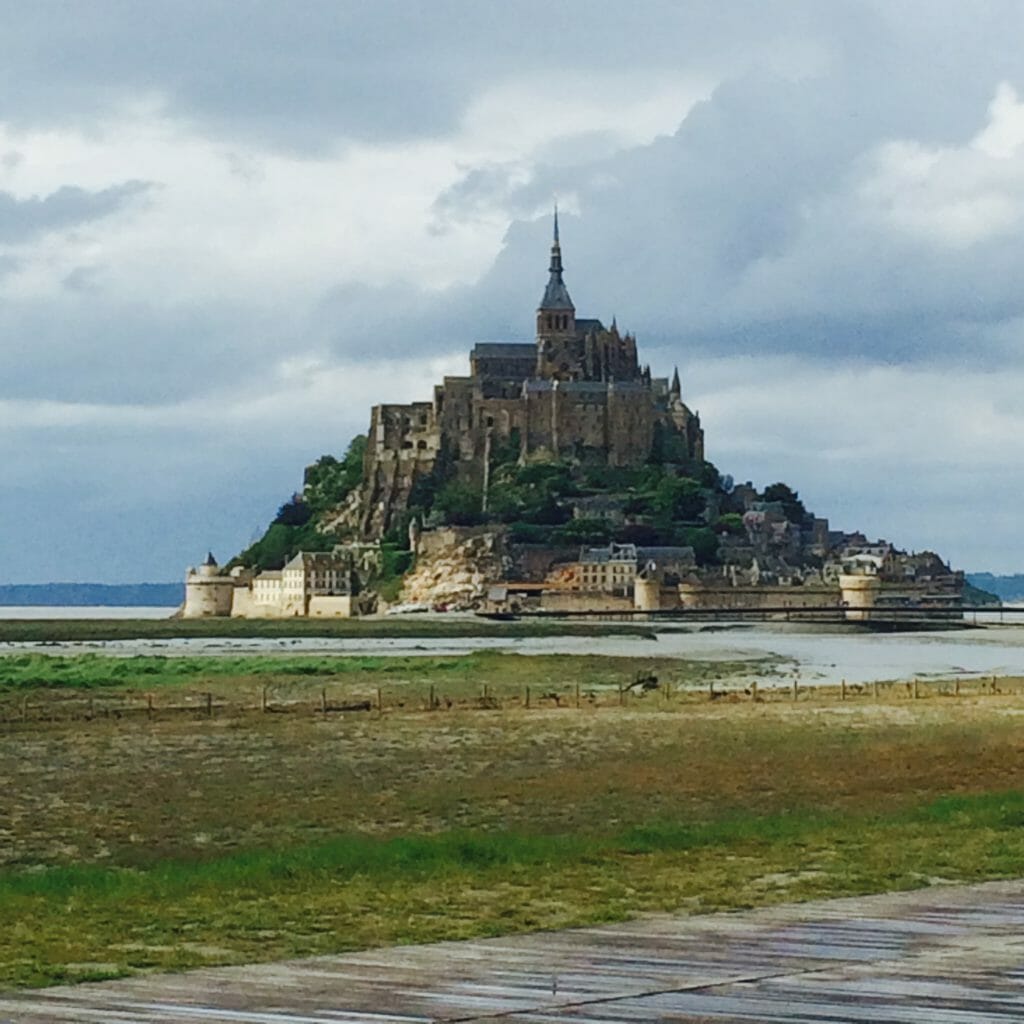 The lovely hotelier at Le Jacoterie where I’m staying in Mont St. Michel tells me le mascaret arrives this evening at seven twenty.  It’s a quarter till seven.  I’ll need to hurry.

I walk out in my high heeled black boots, heels striking wood planks of the long curving boardwalk towards Mont-St-Michel in the near distance, the abbey’s spires rising into the late afternoon baby blanket blue sky.  I hail a passing navette but the lady driver shakes her finger at me, non, non, non.   I’m not at the correct stop.  American in France, alone above the quay, I cuss her out in bad French, then stride long, pounding the boards, arms working, nose into the wind towards the monument.  Above le baie, the air is fresh. Gulls screech in the sky.  I imagine le mascaret sweeping in like a massive tidal wave, washing across this desert of wet sand, seawater encircling Mont St. Michele, making it an island.

I hustle, checking my watch.  Can I make it all the way to where the buses have stopped, across the wide empty parking lot, up the uneven cobble-stoned stairs?  I think not, but strive ahead.  As I pass the return bus stop, I pointedly ignore the tut-tutting blond French driver, my nose in the air, as insouciant as I can pretend in my cashmere scarf and peeling pleather jacket.

At the entrance to the shops and souvenir stalls of Mont St. Michel, I turn left, through the stone arch, up the uneven cobble-stoned stairs, asking a guy ou est. le vague?  Where is the wave?   He looks at me like I am insane, says je ne comprends de toutwith that French attitude that makes me feel ridiculous.  Never mind.  My Timex shows seven nineteen.  I’m pretty sure I’m going to miss it, but I take the steps two at a time to an overlook where some people are standing, then down another set of wide steps to a parapet below where a photographer with a giant telephoto lens the size of one of the columns that support the abbey is leaning way out, focused across the great expanse of sand.  Others are resting elbows on the stone edge of this medieval abbey.

Earlier in the day, I visited the interior, ear pressed to little audioguide learning the history of how in 708, Bishop Aubert built this abbey in honor of the Archangel Michael who had told him, “Tu batiras un sanctuaire qui sera au peril de la mer!  Dans cettee construction, tu celebreras des mots importants pour constuire les gens!”   In that afternoon, along with me, prettily dressed Japanese girls in beribboned straw hats, the Americans in their trainers, and gaggles of French tourists clumped around their supercilious guide wandered through the Merveile.  Afterwards, I’d gone back to my room, had a little rest, looked out over the bay and thought, oh, I don’t need to all the way back!  I mean, there will be a thousand tourists there, and what’s the rush, so I settled in the small garden at a pretty cast iron table and chair with a view of the monument reading, but a pulsing feeling, a beat beneath my left ventricle, “Mais tu es ici! En St. Michel! Tu dois profiteer de cette opportunite!  And so I had set out.  And so I have arrived.  And so has le mascaret.

In the sky white whipped froth of cumulous clouds drift, the sun still high and shining through. Out in the bay are gullies wedged in the sand and higher sand bars, an island in the distance, the far coastline of Genet where I stayed the night before so I could make le pelerinage across this tidal basin in low tide, the guide carrying emergency gear in his backpack, a walkie talkie in a plastic waterproof pocket of a bright yellow official vest.  Thirty of us had walked barefoot across the sandbars I gaze out over now.  I crossed in black nylon socks like my Dad used to wear, feet sucking out of mucky moving sand, crossing against the river’s current, approaching Mont St Michel over the three-hour trek, as simple as climbing a mountain, the  pyramid shape revealing  the base shops square shaping out of rock, the abbey separate from the Mont, minarets emerging out of shadow to embellished spikes, the gilded figure of St. Michael shining into focus on the tip of the highest bell tower.  At a trough of spigots, I stripped my socks, washed my gooey sandy feet, and ordered a café crème at an overpriced little brasserie.

In the pocket of a borrowed Gortex jacket,  I reached for your tri-fold worn brown leather wallet, carried from California to Boulder, from India to France. its ripped plastic window where your driver’s license used to slide, your handwritten notes of the themes of jokes, your Club card, a slip of paper with each of your daughter’s names and birthdates the phone numbers I’d  typed out for you, tearing  at the seams like the old jacket I’ve worn traveling across France to this place, small pack on my back, a credit card slipped into the space where you once stored yours.  I had carried the last packet of your ashes, too, tucked among  pastel Euro notes in the money pocket..

On the weary walk back across wet sand and rising current, chilled and damp, Mont St. Michel at my back, I’d heard the bell strike one to three four and I turned away from the returning marching group and pulled your wallet from my pocket, slipped out the flat plastic packet and opened the skinny zip locked seal.    At that convergence of the rivers, in shafts of sunlight, rays raining from the clouds, the abbey on its tier reflected in the wet sand, smell of clean muck and fresh water, and, implausibly, the scent of attar of rose, I’d let you go, last bits of bone and ash dust motes floating down to merge with the sand of the great bay.  Far beyond, I’d noticed the distant glint of golden St Michael atop the spire, this Archangel Guardian of the doors of heaven where he weighs the value of souls. I’d imagined your light dust on that miraculous scale blown away by this wind.

Just now, here on the Mont, above the bay where I left you, leaning on this balcony of the old city, gulls are wheeling on wings as white as St. Michael’s wings. In the mid-distance, down the middle depression in the sand is the wiggle of a wave, an uneven tiny white surf edge an ancient hand-made parchment slowly unrolling the story of this tide, beginning to usurp the sand and as it seeps gently in across the wide bay, moving at the pace of a sunset or a flower unfolding, a time-lapse movement of centuries.  The moon pulls this tide almost imperceptibly forward: I gaze at the rising water, sand bar disappearing, beneath sheaves of water light.  Beyond this pyramide de la mer,  I decipher rippled hieroglyphics, now a part of your story told in wind, sand, and sky shadowcastings of light.