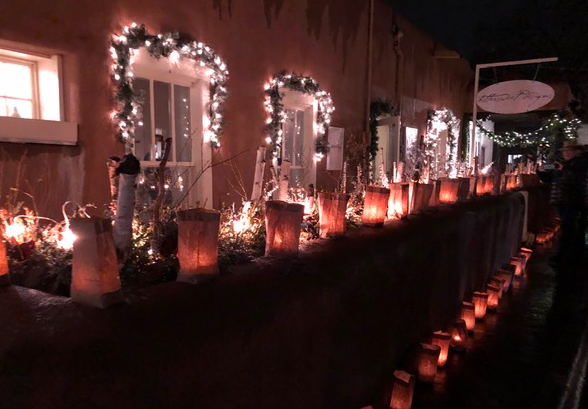 The New Year finds me looking out onto the adobe-walled garden of our townhome on a snowy afternoon. Some of the less-fragile Christmas tree ornaments I’ve collected from countries I’ve traveled to in forty years still dangle from the barren frost-defined branches of the plum tree outside. We live just off Agua Fria which parallels historic Camino Real, the once rugged route running 1,600 miles from Mexico City to the then Spanish town of Santa Fe.  This past season, Ebrahim and I set out in search of this New Mexico capitol’s cultural events–some as foreign to us as Mehregan and Shab-e Yalda are to my neighbors.  At the Institute of American Indian Arts, we meditated with Tibetan Buddhist monks creating (and then destroying) a sand mandala to the Buddha of Wisdom—a lesson in impermanence; we walked with lit candles behind Hispanic musicians serenading the reenactment of Mary and Joseph seeking lodging on the four sides of the downtown Plaza for La Posada; on Christmas Eve we meandered with locals and tourists down Canyon Road lit with its thousands of fajolitos, the air smelling of pinon from the corner bonfires; we respectfully stood against the adobe walls of San Domingo Pueblo with blanket-wrapped Kewa women to observe the deer and buffalo dances on Christmas Day; we danced to an Israeli band on Hannukah for the benefit of Dreamers at our neighborhood brewery; and the day before New Year’s Eve, we listened to an Acapella choir’s sacred Christian songs echo in the ivory space of Loretto Chapel, the beautiful neo-gothic architecture patterned after Sainte Chapelle in Paris.  For us, the invitation to shift away from the dark violence in domestic and international news to celebrate the peaceful diversity of Santa Fe’s many traditions has made this season feel lighter.

Moving here at the end of 2017 was “entering new territory”—not only high-altitude desert geography but metaphorically, as Gloria Steinem writes in Doing Sixty and Seventy (2006). She says that “fifty felt like leaving a much beloved and familiar country –hence both the defiance and the sadness—and sixty felt like arriving at the border of a new one.”  For me, grounded from international work as a traveling Specialist after the fracture and dealing with two years’ of infection and resulting surgeries, my residency in New Mexico has invited exploration not only of the Southwest but of my internal landscape—both journeys as interesting as Karnatica, Zavkahn and Govi-Altai had been two years before.  Steinem says this decade is “not so much controlling time, it’s losing track of time.” In my own flight from pain, engaging in blogging and the creative media-making of Digital Storytelling has been healing, most recently the ones created with lectio divina on Rumi’s poems, merging travel photos from New Mexico/India/ Portugal/Philippines to make one-minute devotions. Selected digital stories are uploaded under Jode’s Stories.

This coming year, I’m focused on physical recovery to full mobility and returning to professional work through this just-launched website.  A book chapter Voices of Young Women Leaders: Swaraj and Satyagraha through Digital Storytelling is coming out early in 2020, and in March, I’m presenting In Their Own Voices:  The Immigrant Experience through Digital Storytelling at the international TESOL 2020 conference in Denver. In April, Ebrahim and I are traveling to Tajikistan with support from a Fulbright Alumni grant to work with Zebo and give voice to her ACCESS girls through DST,  On the local front, I’m waiting to hear about a grant to support Santa Fe’s Southside teens in sharing their voices of the City Different.

As we each navigate crossing over into a new decade and the challenge of this election year, I hope for health, well-being, and social justice, especially for those seeking asylum at our southern border.